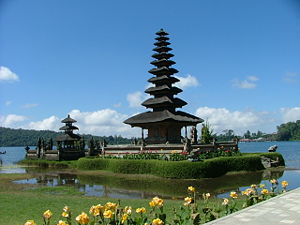 There were so many places to see in Bali that my friend decided to join the tours to see as much as possible. My friend stayed in Kuta on arrival. He spent the first three days swimming and surfing on Kuta beach. He visited some tour agents and selected two tours. The first one was to Singaraja, the second was to Ubud. On the day of the tour, he was ready.

My friend and his group drove on through mountains. Singaraja is a city of about 90 thousands people. It is a busy but quiet town. The street are lined with trees and there are many old Dutch houses. Then they returned very late in the evening to Kuta.

The second tour to Ubud was a very different tour. It was not to see the scenery but to see the art and the craft of the island. The first stop was at Batubulan, a center of stone sculpture. There my friend watched young boys were carving away at big blocks of stone. The next stop was Celuk, a cente for silversmiths and goldensmiths. After that he stopped a little while for lunch at Sukawati and on to mass. Mass is a tourist center My friend ten-day-stay ended very quickly beside his two tour, all his day was spent on the beach. He went sailing or surfboarding every day. He was quiet satisfied.
Share This Post